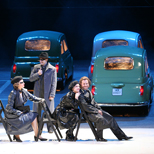 Act I
Scene 1
Morning in a cheap hotel. Dr Cajus storms into John Falstaff´s room, Falstaff´s drinking companions Bardolfo and Pistola having robbed him bare the day before. But Falstaff merely makes fun of the hard done-by doctor. Cajus leaves with nothing. Falstaff reproaches his friends with their "dirty work". He himself is interested in something entirely different. He has written love letters to Alice Ford and Meg Page, the beautiful wives of two rich men. Bardolfo and Pistola refuse to deliver Falstaff´s letters, believing it to be dishonourable. Falstaff cynically reflects on the meaning of honour in the modern world and throws out his drinking companions.
Scene 2
The friends Alice Ford, Meg Page and Mrs Quickly meet in a women´s beauty salon. Nannetta, the Fords´ daughter, is there too. Reading the letters from Falstaff, who has not even bothered to change the text and has sent each woman an identical letter, they are enraged. The women decide to take revenge on their luckless admirer.
A sports club. Ford, Dr Cajus and Fenton, who is in love with Nannetta, appear. Falstaff´s former friends Bardolfo and Pistola warn Ford of the old rogue´s plans. Furious, Ford decides to keep a close eye on his wife and gain Falstaff´s trust. And so everyone has been drawn into the convoluted plot with the exception of Nannetta and Fenton who are absorbed in their own love.

Act II
Scene 1
Falstaff is pampering himself lazily in the bath. He condescendingly accepts Bardolfo and Pistola´s repentance, who have seemingly come to confess. But in fact they have come not just to confess, they have brought Mrs Quickly with an answer from Meg Page and Alice Ford. Mrs Quickly tells Falstaff that both women are madly in love with him and Mrs Ford has even appointed a rendezvous.
The minute Mrs Quickly leaves, Bardolfo ushers in Ford, disguised as a businessman called Fontana. Ford gives Falstaff a tightly stuffed wallet, persuading him to help seduce Alice. Falstaff assures Fontana of his success in the affair: as it happens, Alice´s husband is absent and he plans to visit her. Ford envisages how he will punish his unfaithful wife. However, he maintains self-control and leaves the hotel with Falstaff, who has decked himself out in fine clothes.
Scene 2
At Ford´s house Alice, Mrs Quickly and Meg Page are laughing and preparing for the date with Falstaff. Only Nannetta fails to laugh: her father has decided to marry her off to Cajus. In the meantime, preparations have been completed for the meeting with the old Don Juan. Falstaff enters in his finery and, singing merrily, begins to make his move on Alice.
Unexpectedly Mrs Quickly and Meg appear to warn him about the enraged Ford. Terrified, Falstaff hides in a laundry basket. Ford bursts in with a crowd of guards and orders that the house be searched. Alice, seizing her moment, has the contents of the laundry basket dumped into the gutter outside.

Act III
Scene 1
In the dirty gutter, Falstaff tries to resign himself to his humiliation. Suddenly Mrs Quickly appears with a letter from Alice, which revives his spirits. Alice apologises for what happened and appoints a meeting in the park. Mrs Quickly explains that no-one will see them there as the place has long been reputed to be cursed and that evil spirits gather there at night. The whole Ford family, Meg and Fenton overhear the conversation. Convinced of Falstaff´s simple naivety they plan to dress up as these "evil spirits" and scare the living daylights out of him.
Scene 2
Falstaff appears on the stroke of midnight. He is surrounded by witches, devils, dwarves and evil spirits. They poke fun at him, pinch him, hit him with sticks and lash him with nettles until he repents of his sins. Then they all remove their masks and the astounded Falstaff realises that he has been duped.
But this is not the only revelation of the evening. Ford´s planned engagement of Nannetta to Cajus miscarries, and thanks to Alice´s slyness Nannetta becomes engaged to Fenton. Falstaff is glad that he is not the only one who has been made a fool of.

All the world is a joke!
Man is born a jester!
Seriousness merely
Clouds the reason.
We all laugh!
He laughs well
Who has the last laugh.